Toronto is well on its way to becoming Canada’s Emerald City, thanks to a bylaw that requires green roofs on new construction. Residences, commercial and institutional buildings over 2,000 square metres must have a roof that’s 20-60 percent “living.” Green/living roofs are partly or completely covered by vegetation, planted into a growing medium and sitting over a waterproof membrane. They often include structural support, irrigation and drainage systems, and can even incorporate greywater treatment ponds.

Green roofs have many benefits. They not only insulate the buildings they shelter but also improve air quality and reduce runoff, easing sewer system loads and preventing associated overflow. They cool in summer, reduce heat loss in winter, and can support birds and other wildlife. Where green roofs top public buildings, they create public green space and parkland. Living roofs can even help cool an entire city in the summer by reducing what’s known as the “urban heat island effect,” where traditional roofing and paving materials increase the overall temperature of the air. Scott Torrance Landscape Architect, Inc. designed this beautiful-yet-functional green roof atop Esri Canada in Toronto. 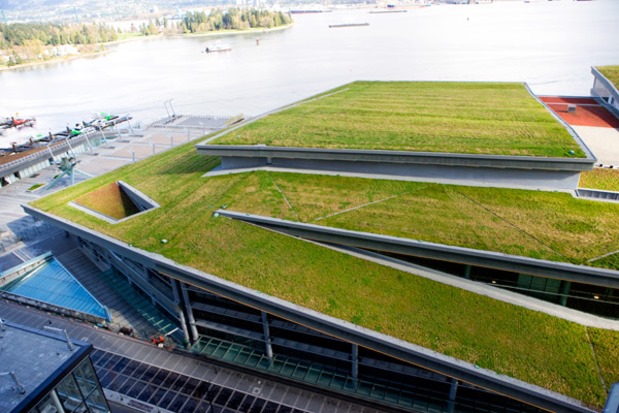 Growing in popularity, green roofs can be installed on everything from your own home to a giant arena. They have a long history — from the Hanging Gardens of Babylon to sod houses in Scandinavia — but today’s green roofs use modern technology for roofs that are clean, low-maintenance and even useful (imagine growing vegetables and fruit on the unused space just above your head). Living roofs are becoming big business: the Green Roofs for Healthy Cities initiative (whose annual conference is being hosted in Toronto this year) lists over 100 corporate members, and the list is growing fast. The first city in North America to mandate green roofs, Toronto has also been a leader in installing them, with 72,000 square metres of green roof space created in 2014 alone — and permits pulled for 186,000 square metres! But it’s not just Toronto who’s in on the action. Vancouver claimed the title of the largest green roof in Canada as far back as 2010, when LMN Architects built the world’s first LEED Platinum convention center with this sedum topper.

Still need convincing of the glory of green? Studies show the increase in living roof space in Toronto will reduce sewer overflow to the tune of three extra open beach days per year. Now that’s progress everyone can appreciate.

7 Ways to Naturally Freshen Up Your Home for Selling+

HAPPY NEW YEAR! – 2017
A Washing Machine That Guarantees Weight Loss: This is Amazing!